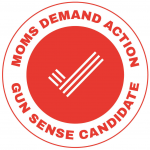 Moms Demand Action for Gun Sense in America is a grassroots movement of Americans fighting for new and stronger solutions to lax gun laws and loopholes. Since its inception after the tragedy at Sandy Hook School, Moms Demand Action has established a chapter in every state of the country and, along with Mayors Against Illegal Guns and the Everytown Survivor Network, is part of Everytown for Gun Safety, the largest gun violence prevention organization in the country with more than four million supporters.

The group awards the Gun Sense Candidate distinction to those “standing up for gun violence prevention and recognizing gun safety.”